Evangelist Cindy Griffiths on The Road to Forgiveness

Be sure to subscribe to Inspirational Sermons via email, this way you'll never miss a new episode:

You can also listen on:

Can relationships get to a point where they can become too burdensome? How do we respond when we believe they do? What is it about our human nature to feel that sometimes we have reached our limit in a relationship? More importantly, what does that recognition tell us about who God is? Join Pr. Bob as he uses experiences from his ministry to delve deeper into the nature of both humanity and divinity.

This Relationship Has Too Much Water Under the Bridge

Years ago, when I worked for a hospital in Florida, I got to know a young couple who also worked there. I'll just call them Joe and Jane. Jane was about 29 years old. Joe was in his early 30s. Jane was not only working full-time for the hospital but a graduate student as well. Joe was out of school completely.

What a great couple, always loving, always around each other. They had a lot in common and seemed like the perfect couple. They'd been dating for three or four years. I can certainly see them getting married. Then I noticed that Joe wasn't around very much.

I worked closely with Jane and was around her a good bit during the day. I’ve mentioned, "Hey, I haven't seen Joe in a while. Everything okay?" That's when she said, "Well, Bob, we're really breaking up." I was stunned. None of us ever really knows what's going on in a relationship, but that took me by surprise. I was not expecting that.

I said, "Really? What happened?" Here's what she said, and I've never forgotten it even though it's been some 35, 40 years. "Bob, the only thing I can say is there's really been too much water under the bridge in this relationship." I know what she was saying: "Too much has gone on, we've had to deal with too much. We've had too many struggles."

An Important Dynamic of Human Relationships

Sometimes they come out of years of deliberation. In those situations, it's usually pretty hard for me to change anyone's mind. Get them to take a look at it again or even get into counseling, and that's unfortunate. But it's really interesting because it opened my eyes to a really important dynamic of our humanity, of human relationships.

Here's another story, a true story. A woman came to see me. She has been married for 25 to 30 years, perhaps. They've had a couple of grown kids. Her husband goes on a business trip out in another state, cross country. A day goes by, she doesn't hear from him. Two days go by, she's calling, texting, leaving messages. He's not returning them. This is her husband.

On the third day, she panics. She calls all his family. They finally get him to answer, track him down. He was having an affair with someone, that was the nature of this "business trip." I guess he decided when he got there, he was just going to spend 100% of his time with his new girlfriend. He didn't need to get back to his wife.

When she came to see me, she explained that this had happened before, but she said something interesting. She said, "This time, it hurt, and I've had enough." I’ve wondered about that.

The Water Under the Bridge Has Reached My Limit

I wonder if I should have gone deeper and asked the question, "Why this time?" Really, I was just dealing with her pain at that point. I’m just trying to help her get through that pain, that grief. I always wondered, what was it about the other times? Why this time? But the point is this, there does come a time in human relationships.

Just the other day, I had a student come to me, a college student. She's involved with a friend of hers who has been a difficult friend to have a relationship with for years. A lot of drama, she always had problems. There came a situation in which this person had to forgive her friend, and she did.

She asked me, "Because I forgave her, does that mean I need to continue with this relationship as is?" I said, "Absolutely not." There comes a point at which, regardless of whether or not you choose to forgive, I hope you do. It releases you and not just them.

Regardless of the emotions involved and how close you are at that point, the fact is that some people can look at the totality of their relationship with somebody and say, "I can't do this anymore. This is hurting me and I'm not helping this other person. I'm done. There's just too much water under this bridge. " and I completely get that.

I can tell you the pain in the faces of people I’ve seen sitting across from me in my office at the church. People who are heartbroken because there's just too much water under the bridge. They've reached their limit and they can't do it anymore. That is completely human.

But here's the thing, if there's one thing that I get out of Scripture, it is this, God never reaches His limit. God never says to me or to you, "I've had enough. How many times, Bob, have I told you this and yet you don't listen? How many times have we been around the block on this, Bob?" God never says to you, "I'm done. No more with this person." God has no such limits and that's the beauty of our relationship with God.

He doesn't remember our past when we ask Him for forgiveness. That's the beauty of the next day with God, the next moment. An opportunity to start again, to confess your sins, to ask God for His forgiveness. To receive it and move forward, asking for His help.

I had a conversation the other day with a very brave man. He called me to tell me that he has been diagnosed with Alzheimer's disease. While we did some things together, he said, "Bob, I don't know that I'm going to be able to continue doing these things. The doctor has told me what this progression is going to look like."

He said, "You know something, though? I've learned something about God." He said, "Everyone's Alzheimer's progresses a little differently."

With God, There's Never Too Much Water Under the Bridge

Some people and I've seen this, they lose their ability to speak, to grasp the right words. They struggle to find those words and they just can't find them. That's not what he deals with. He's eloquent still, always has been, he just can get lost.

He says, "If I'm looking to find a place I'd been a month ago, I have no idea where to go. If my wife says, 'Hey, do you remember this that we just did the other day?' It's not like I kind of faintly remember it. 'Oh, yeah, that's right.' None of that. It's not there at all."

"I have zero recollection, no memory of that at all. 100% nothing. I thought about it. That's what God tells us about us and our sins." He says, "Now I know what it feels like to not remember anything at all."

God never goes back and says, "Bob, this is what, number 162 of the times I've told you this? That is too much water under this bridge. We just need to move on in separate directions. I've reached my limit, I've had enough." God never says that and that's the beauty of the gospel.

We always have tomorrow and the next moment to really receive that forgiveness and to live fully in it. So remember that with God, there's never too much water under the bridge. He forgives us and He never holds our past against us as if it cannot even be remembered.

And He does this, not because somehow we have achieved that in our humanity. It’s because in His son, He has sacrificed Himself for us. Thanks be to God. Amen.

As pastor, professor and researcher, Dr. Bob is dedicated to exploring sermons that inspire people and breathe life into them. His passion is to seek out the best preachers in America, highlighting how they use their insights to change lives. 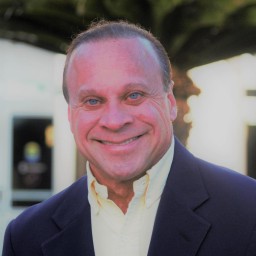 Don't Miss The Next Episode!

Please log in again. The login page will open in a new tab. After logging in you can close it and return to this page.